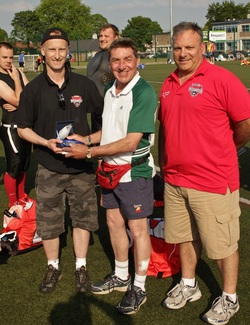 Tony Hughes was presented with the inaugural Bombers Hall of Fame Award for his services to the Bombers and American Football in Lincolnshire over the years.
Here's a little about Tony:

1986 :- A guy called Andy Rastall had a brilliant idea that Lincoln should have its own team. He put lots of flyers all over the place and on a Sunday morning, 75+  potential players and supporters turned up. A committee was formed and set about forming a team. They had enthusiasm in abundance, however they were pretty short of knowledge and money.

1987:- The newly established team organised their first game however Tony was actually unable to take part as he had broken his arm and so started helping out on managerial side.

In Tony's words, One night following a training session he was told "Tony, you will start a youth team. Not would you like. Not we need a youth team can you help. No. I had to do it all by myself. So with a roster of 3 players I made a start." that pretty much summed Tony up!

Over the next few years the roster grew and they started playing double touch football and on the last season they were in the national league and went 10 - 0 and ranked 4 in the country. Unfortunately they lost in the play-off semi-final.
​The next year we went full contact and although we won our first match success was not forthcoming so after 2 years in charge I was dismissed.

While Tony was running the youth team he also had duties with the senior team which over the years included :- manager, game day manager, programme organiser, PR, match day announcer, statistician, ball boy, and I had to mark the pitch out. "In football you name it I've done it! To say I was kept busy is an understatement. How my wife didn't divorce me is a miracle."

After a few years away from the game tony was invited to become the PR officer for the Lincoln Saints. "I agreed on the condition I could play. This was agreed so I attempted to restart my playing career. Then on 1 spring afternoon I took to the field at Derby and my claim to fame was I tackled a giant of a full back. He stood 6ft 6ins tall and weighed 250 pounds. (He gets bigger every time I tell this story)". Whilst Tony kitted up for several games, he then sustained a career ending injury and returned his focus to assisting with the coaching.

After winning the divisional title Tony decided to go back to coaching at youth level and for a few years helped out the Haven Raiders in Boston. "My proudest moment came when my son was made Rookie of the year and Defence Player of the year. As he was ineligible the next year I hung up my whistle until I saw the article in the Lincoln Echo, put there by Iain Bushell and thought I would give it one more try. The rest as they say is history."