A battered and bruised Lincolnshire Bombers squad came within a single score of reaching an unlikely play-off berth as they fell to the Chester Romans in the last match of the 2017 season.

Already overachieving compared to their pre-season predictions, the Bombers made the long trip to Cheshire in search of a seventh win of the season, which would take them into the play-offs for the first time in their history and complete a incredible run of five straight victories.

Chester, the division's top seeds at the start of the season, had been well beaten by the impressive Shropshire Revolution home and away, before a third defeat - this time to the Staffordshire Surge, left them on 6-3, the same record as the Bombers, heading into a decisive final fixture in the race for second place.

For the Bombers it was win or bust. While the Romans held the head-to-head record over the Surge, the Bombers agonisingly had a negative deficit of 1pt to the Surge after a 34-18 defeat and 15-0 victory, meaning they needed to pull off their biggest win of the season against their highly fancied hosts.

As if the play-off berths on the line wasn't enough drama for the pre-game, the Bombers found themselves needing to borrow jerseys for the final fixture as the red Romans home kit clashed with Lincolnshire's only strip. After some last minute negotiations and a quick handover, local rivals the Humber Warhawks kindly lent their white away jerseys (thank you guys). 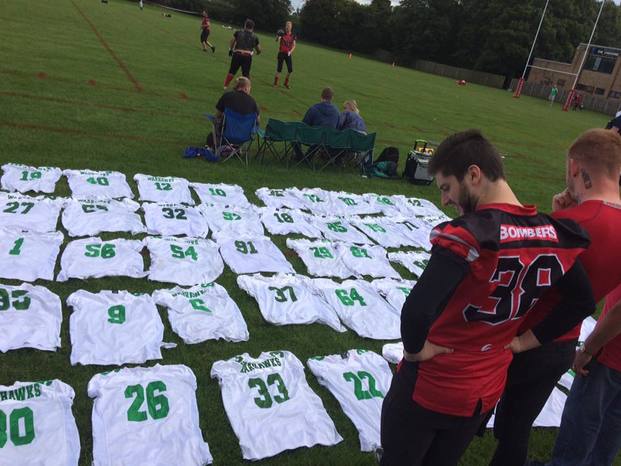 ​Finally, kick-off was reached and the difficulty of the task became quickly apparent as the Romans marched down the field on their opening drive, courtesy of a couple of passing plays and two nice outside runs.  However, just as the Bombers prepared to start 6-0 down, the Romans quarterback inexplicably threw the ball on a second-and-goal straight into the arms of the grateful Joe Hickson, who took the gift and gave the visitors a huge confidence boost.

Although the offence's first drive began on the 6-yard line, they moved the ball well and were able to get to midfield before the drive stalled when quarterback Andy Bagnall received a late blow to the head on an inside run and had to come off for the first time.

The rest of the first quarter passed scoreless as neither side could force a breakthrough. The Bombers defence, fresh off the back of two shutouts, replicating the Romans miserly defensive front.

However, the deadlock was finally broken in the second quarter. A long catch and run from the Romans wide receiver down the Bombers right ended in the opening touchdown and a 6-0 lead for the Romans with the PAT failing through a fumble.

Previously that may have been the start of the end for the Bombers as belief wavered, but, soon after the visitors picked up their first points of the game. A solid drive finished with a fine field goal attempt which reduced the deficit by half.
​There was still time in the first half for more key action to take place. Firstly, the Romans extended their lead with a field goal of their own, before another hit on Bagnall forced him out of the game. The Bombers drove once more after that but with time running out, another field goal attempt from half-way, this time by Callum Huckle, fell short as the score at the break read 9-3 to the Romans.

Things looked bleak for the Bombers chances as injuries started to mount. Alongside Bagnall, key linebacker Joe Pinkstone was forced out in the first half with a knee injury and later Ben Smith following a heavy landing after a cut block. As travelling offensive lineman Mikey Gray was also unable to kit-up it forced a number of changes. Lewis Colver came in at quarterback, running-back Ross Wheatley helped fill in at linebacker, Adam 'Buff' Bailey moved from tight end to left tackle and Morgan Page played both ways at tight end and defensive tackle.

When the Romans picked up the first score of the second half - a second touchdown with a failed two-point conversion to lead 15-3, the game appeared up for the plucky Bombers.

A wonderful reverse sweep play sent running-back Jack Paddison free down the right-hand touchline and, after evading another three tackles in the back field, the youngster took the ball into the end zone from around 70 yards out to close the scoreline at 15-9.

With the season on the line, the defence held fast again and gave the offence one final chance to score with four minutes left on the clock and 90 yards left to the end zone and subsequently, the play-offs.

The Bombers, with young back-up quarterback Lewis Colver at the helm, started driving confidently and picked up three first downs to reach midfield, including throws from Colver to wide receiver Russell Moore on both third down and later fourth down to keep the drive and season alive.

However, despite Colver's best efforts and the offence reaching Chester territory with just under a minute left on the clock, they were unable to punch in a fourth down run and turned the ball over on downs to end their valiant effort. Chester took a knee with 40 seconds to go, and the season was finally over.

The players and coaches drew together on the field at the end of a monumental campaign with a mix of disappointment and pride. The pain of falling so close to the target evident, yet also undeniable satisfaction in a season where the team set numerous club records and had a genuine chance of making the post season for the first time in their history until the final minute of the season.

Thanks to all those who made this season so special this year and we hope to see you again next year when we can push for play-offs once again with a new belief joining the Bombers spirit to push the club to new heights.