The Lincolnshire Bombers took a huge step towards play-off football with an intensely-fought 11-8 victory over 2018 NFC2 South Champions Staffordshire Surge.

For a long time the Surge have been the benchmark for play-off football in the NFC2 South (and Central) and, although they haven't succeeded in getting promoted yet, their consistency has been one that the Bombers have strived to match in recent years. This weekend's success is a big step towards achieving that goal.

The team news prior to the game really was the 'non' team news that, despite initial indications, defensive lineman Joe Hickson did not make his return to action in this game but will likely target the return fixture to Staffordshire (June 9th) to make his comeback from injury. With no real surprises there was also no return for the offensive duo injured at Humber, Jack Cooper (OL) and Nathan Haymer-Bates (RB), while Boawe Rankin (DB) was an absentee from the defence.

The game did, however, see the full debut of former Blitz running-back Kaylind Grant, to compliment Jamal Alvaranga in the backfield in the absence of Haymer-Bates.
The game kicked-off with Surge receiving the ball first (heading in one direction all game as only one set of posts has so far been installed on a permanent basis at the new ground) to meet the Bombers on-fire defence.

The visitors, who had so far beaten both the Humber Warhawks (31-16) and Crewe Railroaders (20-13), started well and ground the ball down the field on opening drive. However, undeterred, the defence stood strong at the right time and forced a punt to prevent any early damage.

The Bombers started their opening drive on the 2-yard line, but excellent work from the offensive line and good carries for both Grant and Yu Joe Bunting gave the hosts some breathing room. Although the drive stalled, the work from the offence and special teams meant the Surge were back to square one.

After those two opening drives, the defences took more control. Iwan Williams picked up on another interception on the season but a blown punt, recovered by the Surge put the hosts on the back foot. Although the Bombers stout defence forced another quick stop, the ensuing punt trapped the offence back on their goalline - this time they would not escape.

A high snap flew into the endzone and was recovered by Surge hands resulting in the opening touchdown. A successful 2pt conversion gave the Staffordshire side the first lead of the day 8-0.

That led to a period of frustration for the Bombers in the second quarter who used up all three timeouts with 11mins left on the clock and who couldn't capitalise on the defence's good work to get back level in the game. A Mike Sison interception was the highlight, while the Bombers last play of the half - a connection from QB Lewis Colver to Ryan Wakeling saw the young receiver get right down to the 2-yard line before the clock ran dead and left the Bombers agonisingly short at half time.

Stern words were said at half time and it was the work of the special teams that shone again on the afternoon. A Bombers punt was downed deep in Surge territory, before a three-and-out saw the Surge punt, but pressure meant only 20 yards was gained on the play.

With the ball in hand, this time the hosts made no mistake. A good drive was finished off by Colver finding Wakeling again, this time in the endzone, to bring up the Bomber's touchdown. A powerful Kaylind Grant run then tagged on the 2pts and levelled the game at 8-8.
​You could sense the tide had started to turn and against other teams this would have been enough, but the well-coached Staffordshire side are a tough outfit to dislodge and kept themselves in the game throughout the rest of the third quarter. As the visitors offence continued to crash against the Bomber's defensive wall, it was the visitors defence who strove to keep the Bomber's offence at bay, a job it was barely managing with the help of a few penalties against the home side.

Finally, with five minutes left on the clock, the Bombers made the breakthrough. Another Sison interception, helped by a pass break-up from Adam Simeoni, gave the offence the ball at midfield and the battle for yards began again. After a tough grind, the Bombers made the redzone but were held up by the Surge defence - resulting in a field goal attempt by Andy Bagnall. The snap and hold were good and the kick was pure, high and long as the hosts finally hit the front for the first time, 11-8.

Amazingly, despite all the defence's impenetrable work throughout the game, the Surge somehow finally found a crack with their next drive. One long desperation throw on fourth down drifted over safety Iwan Williams head and into the hands of the Surge receiver - their longest play of the day by a long stretch.

With the pressure back on, the Surge went long again and connected once more, however, this time Williams made amends. With the Surge player held up in the tackle just five yards from goal, he ripped the ball out (see below) and gave the team back precious possession to a raucous reception from the home sideline.

Still facing their own endzone and with the Surge on a full allocation of three timeouts, the Bombers looked to work the clock with the run game but hit fourth down with 1min42 still remaining. A punt took the hosts to the 60 yard line, potentially leaving a tantalising drive to end the game, however, a roughing the kicker penalty enforced on Surge meant the Bombers were able to kneel out a dramatic victory.

No doubt a huge win for the hosts which temporarily puts the top of the division until Birmingham play again. The spirit shown in the victory was incredible and the play by Williams at the death was one of the most dramatic moments in recent memory. Next up, the Bombers will return to play Surge in Staffordshire (June 9th) and go through the big test again for the battle at the top of the NFC2 South. 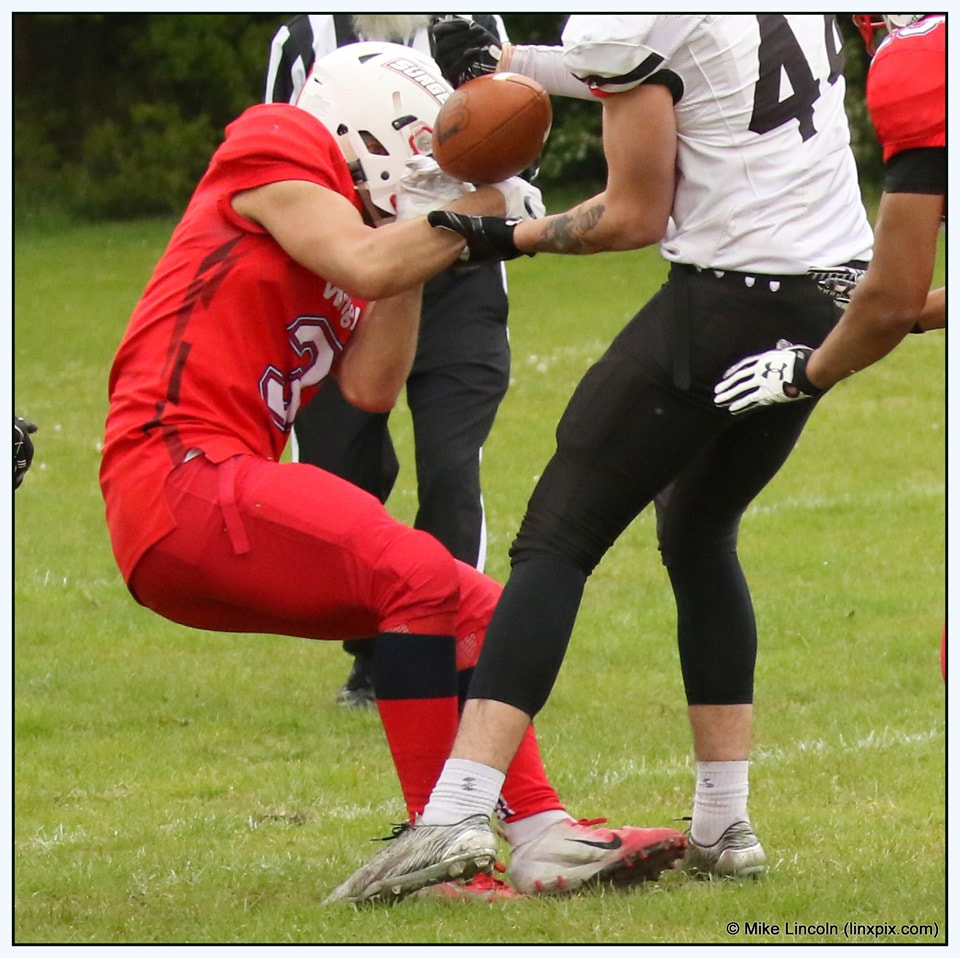