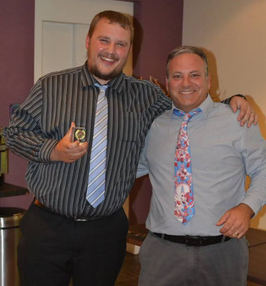 Let's start from the beginning.  Sharpy joined  the Bombers in 2010.  He immediately took a role in the offensive line and pretty much played every position in the offensive line, and played it well.  It was 2012 when his knee decided to bend the wrong direction in the very first game of the season, and he had to sit that year out but still came in and did his part helping where he could.  When he came back he played at the level only he could play at busting ass all game long.

He then joined the coaching staff in the 2015 season taking up O Line coaching.  He exceeded everyones expectations at that position and returned to that role in 2016 showing how good of a coach he was by making something out of even Martin Brearley...  He dressed a few more times and played on both sides of the ball until the blisters from his knee brace became unbearable, but he still had it, and I am convinced he still does.

He had the additional role of Special Teams Coach added on this year and did well at it.  On the other side of the page he did more for this team than I could ever remember.  He was the equipment manager for the last 2 years, if the pitch needed marking, he was either doing it, or helping to do it.  I’m pretty sure he paid for the marking paint too...  He stored almost all of the gear and started the equipment for hire scheme.  If it wouldn’t fit in the car, and it wouldn’t fit in his van, he would get his big work van and made it fit.   He heard me talking about some drill I wanted to set up but had no idea where to get the materials, so, he did it...  I wanted some barrels for drills, he got them, put them in the big van and brought them.  And when we ran short of tape, a couple of boxes magically showed up on my doorstep, and this happened a few times too...

​He is a great friend to each and every one of us, he was a great lineman for the game of football and The Lincolnshire Bombers.  He stood by me and this team when we went through all of the crap that we have been through, and kept his head.  He also sacrificed hours of patience listening to me in the car to and from training and games (which was probably his toughest role of all)...  He is a husband to Irene, he is father to Jaxon.  He is a father in waiting again, and is having some time away after devoting an immeasurable amount of time, effort, energy and company donations over the years.  He is our team mate, he is our Coach, he is our sponsor, he is our friend.  He is our 2016 Hall of Fame Inductee.